We walked out onto the tarmac and saw the plane, I thought wow it is tiny! As we flew it was bumpy and the dads screamed like babies but I just enjoyed the views of the animals below.

The little plan that kicked off our African Adventure

This was a real holiday of a life time with memories that we will all carry forever. It was at the high end of our budget but it was worth it. We had a great mix of safari and activities.

We chartered a plane from Wilson Airport, in Nairobi, to Lewa, and from Lewa to Green Park, Lake Naivasha, it was amazing, quick and scenic way to transfer, while it was expensive I think it was money well spent for the ease, safety, complete experience and time saved.

Lewa Wilderness was amazing, below are just some of the things that were a highlight for the kids, but there is too much to write about.

I was worried the kids would get bored on safari but Andy, our guide, was fabulous. He had organised such varied activities and drives that the whole family stayed fully engaged and enthusiastic for the full 4 days at Lewa.

Met off the plane with a cool drink, safari trucks and straight into the adventure.

I was glad they told us to lean back when the camel got up or else something bad definitely would have happened. When the camel got down to the ground I screamed and Ami's eyes were wide with panic.

When we saw the Rhino so close I was scared, but it was good the guides told us they were White Rhino so it was OK, and they were warriors with a knife so I felt better.

I remembered from the safari yesterday that Black Rhino might attack but White Rhino are more friendly, it was two big rhino and a baby and I know sometimes mummies with babies try and protect them so I was still a bit worried but the warriors walked first and the rhino moved out of the way.

We saw an elephant bath up close and lion poo, they showed us lion footprints in the dust, they told us they were from last night so the lions will be far away now and resting because it is day time so we didn't need to be scared. 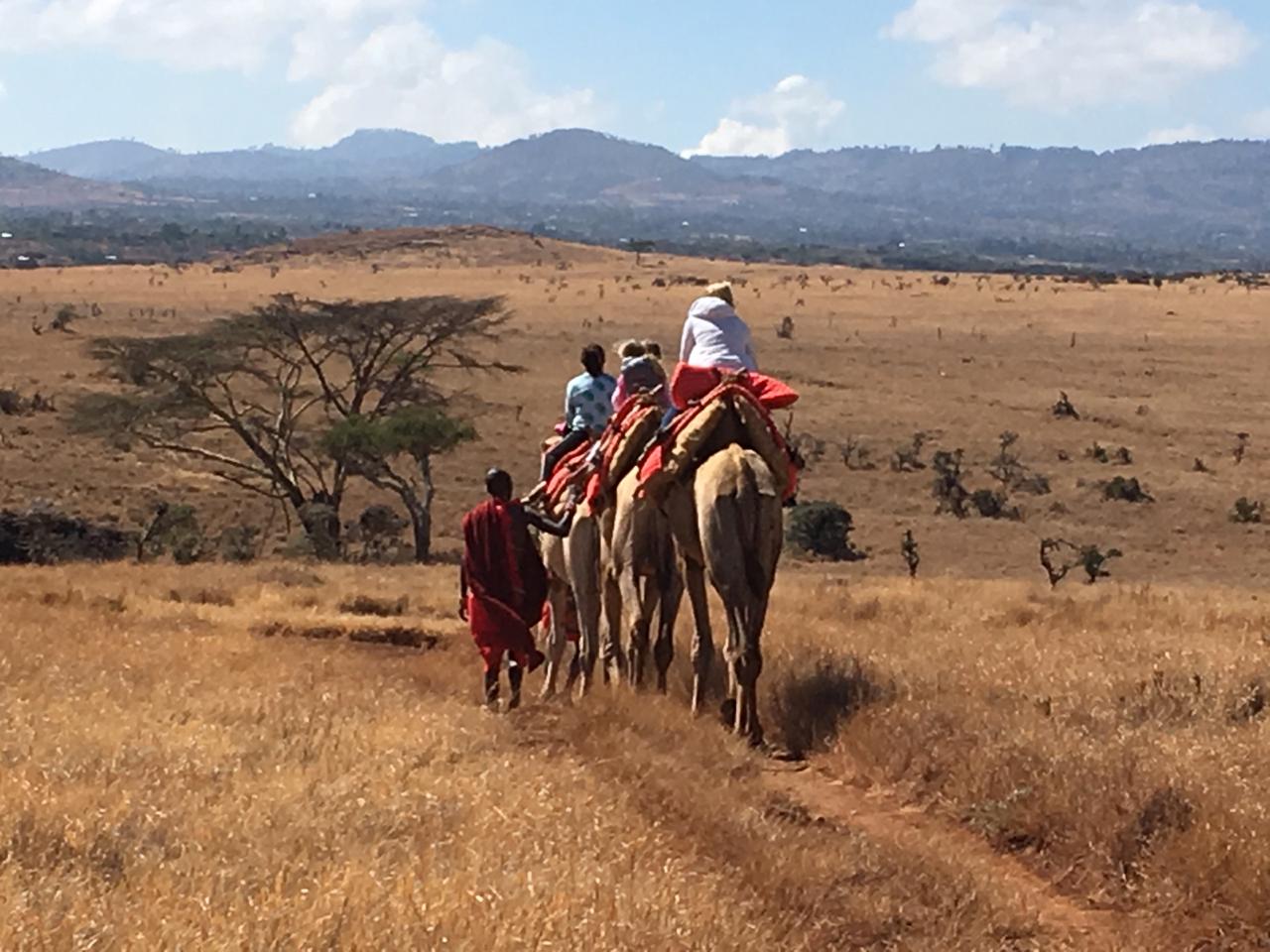 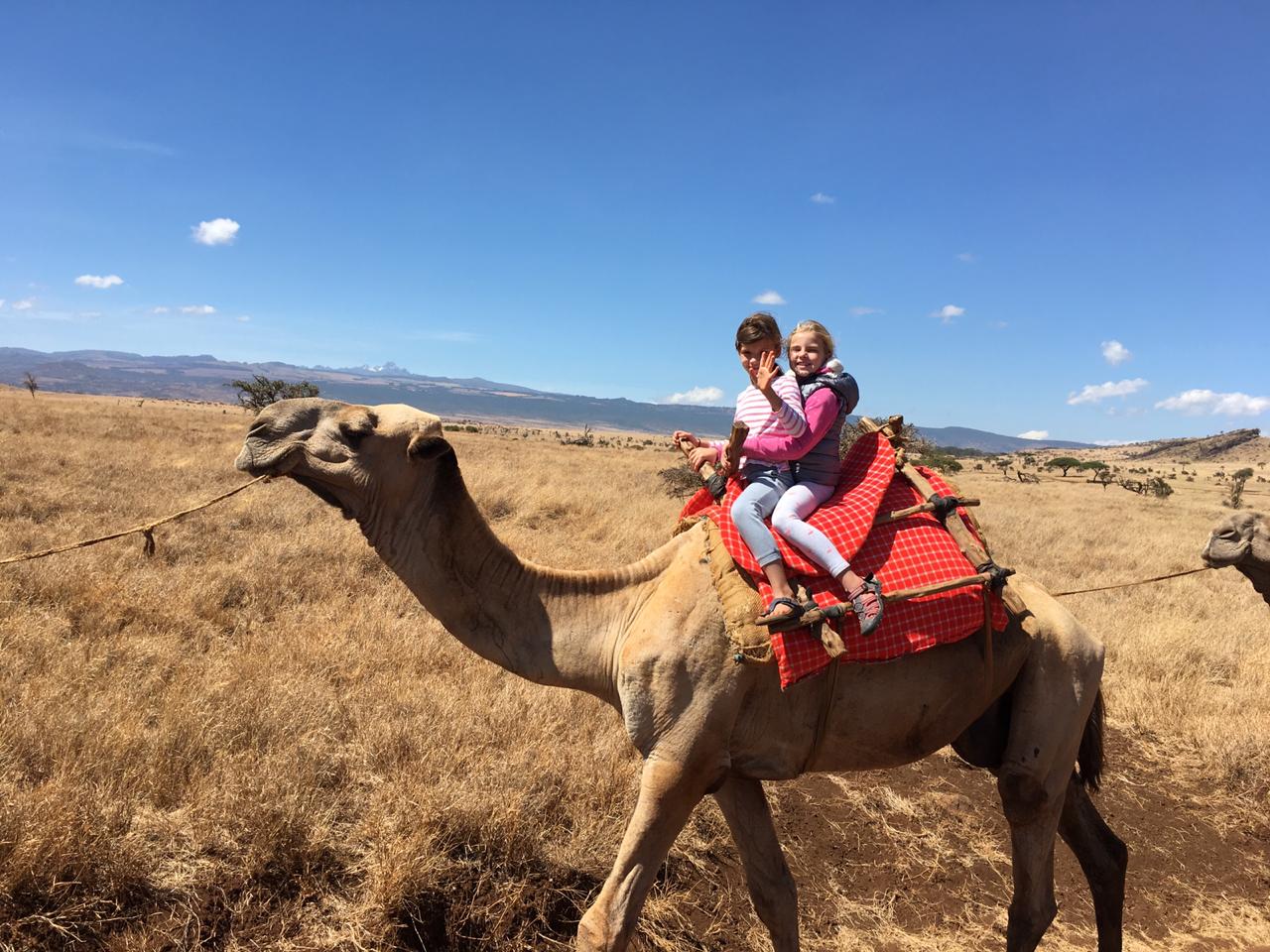 The Giraffe stood long and gracefully watching us. We smiled back at him and I knew he was friendly even though he was enormous

The Baboons sat picking nits out of each other hair, not as big as we thought they would be they hardly noticed as we rode on by

The Mickey Mouse Zebra has even bigger ears when you see them close, they were as big as our horses.

{"items":["a27d24_1ffa239ba308418ba7ca696096fdd7ca~mv2_d_3024_4032_s_4_2.jpg","a27d24_432104304c4e4df7b5a31704d1a1cbaf~mv2_d_4032_3024_s_4_2.jpg","a27d24_2387bda51aa749469cc9d9e106821d82~mv2_d_4032_3024_s_4_2.jpg","a27d24_e0f3d5b4da1d4faa86b4328f6bc0194c~mv2_d_3024_4032_s_4_2.jpg","a27d24_ce5ddd0cddfe4460972dfffba0577710~mv2_d_4032_3024_s_4_2.jpeg","a27d24_df36bf5850c64c79b407d6035180fffc~mv2_d_3024_4032_s_4_2.jpg"],"styles":{"galleryType":"Columns","groupSize":1,"showArrows":false,"cubeImages":true,"cubeType":"fill","cubeRatio":1,"isVertical":true,"gallerySize":300,"collageAmount":0,"collageDensity":0,"groupTypes":"1","oneRow":false,"imageMargin":10,"galleryMargin":0,"floatingImages":0,"chooseBestGroup":true,"smartCrop":false,"hasThumbnails":false,"enableScroll":true,"isGrid":true,"isSlider":false,"isColumns":false,"isSlideshow":false,"cropOnlyFill":false,"fixedColumns":3,"enableInfiniteScroll":true,"isRTL":false,"minItemSize":50,"rotatingGroupTypes":"","rotatingCubeRatio":"","gallerySliderImageRatio":1.7777777777777777,"numberOfImagesPerRow":3,"numberOfImagesPerCol":1,"groupsPerStrip":0,"borderRadius":0,"boxShadow":0,"gridStyle":1,"mobilePanorama":false,"placeGroupsLtr":false,"viewMode":"preview","thumbnailSpacings":0,"galleryThumbnailsAlignment":"bottom","isMasonry":false,"isAutoSlideshow":false,"slideshowLoop":false,"autoSlideshowInterval":4,"useCustomButton":false,"bottomInfoHeight":0,"titlePlacement":"SHOW_ON_HOVER","galleryHorizontalAlign":"center","galleryTextAlign":"center","galleryVerticalAlign":"center","scrollSnap":false,"itemClick":"link","fullscreen":false,"allowSocial":false,"allowDownload":false,"allowTitle":true,"allowDescription":false,"loveButton":false,"loveCounter":false,"videoPlay":"onClick","scrollAnimation":"NO_EFFECT","scrollDirection":0,"overlayAnimation":"NO_EFFECT","arrowsPosition":0,"arrowsSize":23,"watermarkOpacity":40,"watermarkSize":40,"useWatermark":true,"watermarkDock":{"top":"auto","left":"auto","right":0,"bottom":0,"transform":"translate3d(0,0,0)"},"loadMoreAmount":"all","defaultShowInfoExpand":1,"allowTitleExpand":true,"allowDescriptionExpand":true,"allowLinkExpand":true,"expandInfoPosition":0,"allowFullscreenExpand":true,"fullscreenLoop":false,"galleryAlignExpand":"left","addToCartBorderWidth":1,"addToCartButtonText":"","slideshowInfoSize":200,"playButtonForAutoSlideShow":false,"allowSlideshowCounter":false,"hoveringBehaviour":"APPEARS","thumbnailSize":120,"magicLayoutSeed":1,"imageHoverAnimation":"NO_EFFECT","calculateTextBoxHeightMode":"AUTOMATIC","calculateTextBoxWidthMode":"PERCENT","textBoxHeight":0,"textBoxWidth":200,"textBoxWidthPercent":50,"textImageSpace":10,"textBoxBorderRadius":0,"textBoxBorderWidth":0,"textsVerticalPadding":0,"textsHorizontalPadding":0,"titleDescriptionSpace":6,"customButtonText":"","customButtonBorderWidth":1,"customButtonBorderRadius":0,"loadMoreButtonText":"","loadMoreButtonBorderWidth":1,"loadMoreButtonBorderRadius":0,"imageInfoType":"NO_BACKGROUND","itemBorderWidth":0,"itemBorderRadius":0,"itemEnableShadow":false,"itemShadowBlur":20,"itemShadowDirection":135,"itemShadowSize":10,"imageLoadingMode":"BLUR","expandAnimation":"NO_EFFECT","imageQuality":90,"usmToggle":false,"usm_a":0,"usm_r":0,"usm_t":0,"videoSound":false,"videoSpeed":"1","videoLoop":true,"galleryLayout":2,"gallerySizeType":"px","gallerySizePx":300,"allowHover":true,"mobileSwipeAnimation":"NO_EFFECT","gotStyleParams":true,"showVideoPlayButton":true,"modifiedGallerySize":true,"selectedLayout":"2|bottom|1|fill|true|0|true","layoutsVersion":2,"selectedLayoutV2":2,"isSlideshowFont":false,"externalInfoHeight":0,"externalInfoWidth":0},"container":{"galleryWidth":2580,"galleryHeight":1440,"scrollBase":0,"height":null,"width":null}}
Crossing a tree root bridge on our afternoon walk amongst the wild

We stared at the lion and the cheetah. Mysterious animals, with questions all around them, for instance, do Cheetahs have the same spots, how many Cheetahs are left in the world?

When the lion started moving my heart stoped and my body froze, but then it went away from us and I knew it would be ok.

The Giraffe saw the Lion and walked over so close to it. They watched each other carefully and when the giraffe got too close the lion chased him away. The Giraffe stood tall watching the Lion, swishing his tail to warn the other animals that danger was near.

The Lions headed off down the road in hunt of dinner, there was an Elephant Bull walking toward them, who is the real king of the jungle we wondered? The Lions carefully made way for the angry Elephant to storm on by, now we know for sure. The elephant is king!

Eve and Ami adopting the tribal look for 'sun downers'

The 'Big 5' are Elephant, Lion, leopard, Rhino, and Buffalo because they will attack humans and are therefore hard to hunt

Elephants have 100,000 muscles in their trunks which makes them heavy and they need to rest them.

Jacob with his own personal warrior escort

Camels usually have 1 or 2 humps, if they have 3 they are pregnant :-)

Camels have no sound box so don't make any noise

Crocodiles don't have a tongue

Rhinos have to turn their heads when they run so they can see infant, because their eyes are on the side of their heads.

McDonalds Gazelle were given their name because they have an 'm' on their bums, they are around every corner, and they are fast food.

Our favourite Animals and why:

Ami: Baboon, I love how the babies cling to the mummies tummies, and they are always curious and shake their bums

Ali: Python, they are so hard to find and move quick as a flash

Rafi: Big cats, they are great at camouflage

Josie: Warthog, they look so funny running with their tails in the air

Eve: Elephants, I really like the elephants and how they work their trunks

Alice: Cheetah, was so elegant walking

Savannah: Baby Rhino, they are so cute

Jacob: Buffalo, they have such big horns

As we sped along the run away a long neck popped up and the pilot went beep beep to clear the giraffe, but the giraffe made no noise, like Ami he was unable to scream. As we approached Nanna Anna’s house we circled the house so she would know we were coming, when we bumped along the runway and climbed out there was Nanna Anna and her dogs, Flip and Chip racing down from their house to greet us.

From Mum: we were so lucky to be travelling with the Herns and able to stay at their home, they do rent it out and I recommend the location and wonderful host Anna to anyone.

There is a huge amount to do around lake Navaisha and I would love to go back and explore more. It was great staying in one place but going out and exploring some of the area each day.

Great Rift Valley Lodge and Golf Resort provided us a car and driver and helped organise some of the excursions for us which was ideal.

As we trotted across the bumpy path and jumped over the exceedingly high jumps my horse tripped, the other was angry in every way, the cheeky horses always wanted to get food and swished their heads

Bouncing over the big jumps

We went to feed the chickens, I think the 8 yr old black chicken had a minor heart attack, he was so spine chillingly terrified as the dogs chased him.

We planted veggies in Granny Anna's garden, You put the egg shells on the table and roll over them with a rolling pin to make tiny bits, when we got to the garden we sprinkled eggshells on the ground, this stops worms and things eating the seeds, we were each given a plastic bag of seeds and scattered them over the eggshells. Then we sprinkled soil over the seeds so now they can grow, even Jacob planted some Vegetables.

As we took off in the boat I wondered, where are we going and are we safe? Then I realised we were going to walk over the island and I was really worried but it was OK. There were not many predators on the island. I found a small white egg with black dots all over that that had not yet hatched so we left it and hoped its mum would find it again.

The giraffe let us get so close and didn't even stop eating to talk to us.

We saw waterbuck and wildebeest and lots of common Zebras. We even saw a python, he looked fat so we think he had his dinner inside

There were lots of bones on the ground and volcanic rock

This is where Fraser and Ali got Married, we played grandmothers footsteps and the monkeys tried to join in. They showed us a hippo head skeleton and its enormous jaw.

We got on the boat and went round Oloidian Lake. I was worried when the hippo looked at us and then disappeared under the water, I thought they might swim towards us but the driver sped off so I knew we were safe.

We were taken to the purple tree (Jacaranda) and got a big stick and a small stick each, we took them back to the house and took off the bark so they became smooth. We then tied string around the big stick and pulled it tight so the stick was bent in a curve, this became our bow and the smaller stick our arrow.

There is a plant called a Rhino plant, it has green leaves but if you rub the leaves between your fingers they go brown, you can use the leaves to paint your nails and your Face!!

We had dinner round a fire and they cooked us sausages and fries, there was a cheetah near by who I think wanted our left overs.

You could look out and see a long way, we couldn't see many animals but we knew they were there because we had just driven past so many

On the way home in the dark we saw lots of hyenas who are much prettier than I thought from the Lion King, we even saw a Hyena eating a wildebeest.

After our game drive in the morning we had breakfast out in the wild. They had a fire by the lake and I think it was to keep away the Hippos.

We adopted two elephant! They were so cute

They raced towards us, knowing it was time for time, trunk to tail in a single line, they bounced on by swinging their trunks joyously and heading towards their beds for the nights

There were 22 elephant, 1 blind black rhino and an angry giraffe

They stay there for three years or until they don't need milk anymore, it then takes 5 years to reintroduce them to the wild as the wild herds are sometimes slow to let them be part of the gang

Kelly and her 1 year old baby boy, I think called Austin wandered over so we could feed them. The baby giraffe ate one pellet at a time with his big black tongue. He had to eat all day because he needs so much food. You held the pellet between your thumb and your pointer finger and greedily but smoothly he pushed his tongue out and wrapped it round your hand and took the pellet